Korea Line Corp (KLC) has been selected as the preferred bidder for Hanjin Shipping’s Asia – US business. 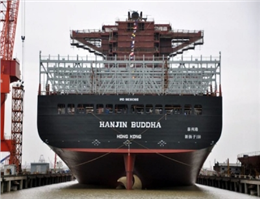 KLC was selected as the preferred bidder for bankrupt Hanjin’s Asia to US business, Reuters reported citing a spokesman for the Seoul court overseeing Hanjin’s receivership, MANA correspondent reported.
KLC is reported to have made a higher bid than HMM for the business, although the bid levels were not disclosed.
Put up for tender last month Hanjin’s transpacific business comprises staff, five containerships and 10 overseas businesses,
KLC itself filed for bankruptcy in January 2011, and currently does not have a presence in the container shipping space, unlike rival bidder HMM, which is now Korea’s largest container line following the collapse of Hanjin. KLC operates in the tanker, LNG and dry bulk sectors.
Although Hanjin has until December to submit a restructuring plan to the Korean courts it is widely expected that the company will be liquidated.
0
Tags: Hanjin Shipping south korea bankruptcy Asia- US
Visit Home
Send to friends
Print
Newsletter
Share this news