Cargo owners in flight to safety after 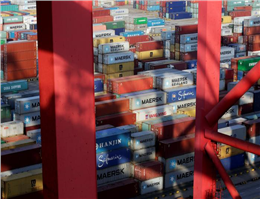 According to MANA, Robbert van Trooijen, Asia Pacific chief executive of AP Moeller-Maersk's (MAERSKb.CO) container shipping arm, said the company was seeing a "flight to safe havens" after the August collapse of Hanjin left $14 billion of cargo stranded at sea.
"We've seen that the debate around the viability of the supplier is a more important element in the contracting decision... A lot of customers are looking at the more stable shipping lines to contract their cargo with," he said.
Hanjin became the biggest casualty of the shipping industry's worst ever downturn, which started after the 2008 global financial crisis as an excess of ship capacity and slowing trade dragged down freight rates.
"They are making additional efforts to check shipping firms' financial status. The most important thing for us is to assure our customers. We have the support of our parent company, Evergreen Group," said the shipping line's spokesman Golden Kou.
Van Trooijen declined to comment on whether the growing caution toward shippers would hasten the demise of weaker shipping lines, but said he expected the acceleration in merger activity to continue.
0
Tags: Hanjin cargo
Visit Home
Send to friends
Print
Newsletter
Share this news