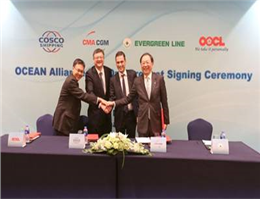 According to MANA, According to China Daily, with a total carrying capacity of 3.5 million twenty-foot equivalent units, or TEUs, OCEAN Alliance will be able to provide a service coverage in the market on a number of trade lanes including 20 trans-Pacific and six Asia-Europe shipping services.
Formed by Denmark's Maersk Line and Switzerland's Mediterranean Shipping Co SA, 2M started its operations in 2015, and controls more than 2.1 million twenty-foot equivalent units, and manages more than 200 vessels.
According to Alphaliner analysis, the Ocean Alliance is set to dominate both the transpacific and Asia-Europe trades in terms of capacity, when the current four alliances become three next year.
The Ocean Alliance will control approximately 35% of capacity on the Asia-Europe route, about the same as the 2M, well ahead of THE Alliance’s around 22%.
Other members of the OCEAN alliance are Taiwan-based Evergreen Line and Hong Kong's Orient Overseas Container Line. They announced this shipping partnership in April to further enhance their earning ability and optimize operational efficiency amid the current decline in global trade.
0
Tags: Ocean Alliance 2M
Visit Home
Send to friends
Print
Newsletter
Share this news