The Suez Canal Authority (SCA) has forecast a $525m jump in revenue this year and says it has received “good feedback” on discount deals designed to tempt shipping lines to commit to Egypt’s historic waterway long term. 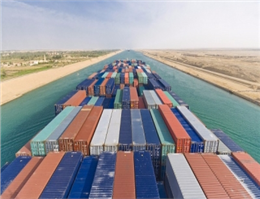 According to MANA, SCA executive Tamer Hammad has been reported saying revenue would reach $5.7bn in 2016, a 10% increase on the $5.175bn achieved in 2015.
Revenue dipped 5.3% last year from $5.465bn in 2014, prompting the SCA to unveil a number of toll rebate sweeteners this year to lure back vessels which have taken advantage of low bunker prices by sailing the long way around the Cape of Good Hope. The Suez Canal is the backbone of the ailing Egyptian economy which has struggled since its 2011 uprising which continues to spook tourists and foreign investors alike.
It comes with SCA in negotiations with Maersk, MSC and CMA CGM after offering a 3% discount to each of the world’s three largest container lines if they commit to paying three years in advance.
0
Tags: Suez Canal revenue rise
Visit Home
Send to friends
Print
Newsletter
Share this news