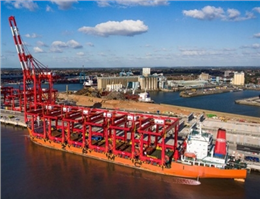 Located at Port of Liverpool’s Seaforth Docks, L2 began building in 2013 but progress has been hindered by difficult conditions for dredging of a berthing pocket to 16.5 m, MANA correspondent reported.
Other construction work has included creation of a new quay wall, land reclamation to create the 16 ha site, installation of eight 24 container outreach ship-to-shore quay cranes and 22 cantilever rail mounted gantry cranes, plus shore-based infrastructure and access improvements.
The new deepwater terminal aims to attract the larger size of containership in operation today, especially those on Atlantic trades that may have transited the widened Panama Canal on route from East Asia.
Indeed, at end-October Peel Ports signed an MOU with the Panama Canal Authority to create a strategic alliance to promote trade routes between Liverpool and the west coast of South America via the Panama Canal.
Mark Whitworth, chief executive of Peel Ports, commented: “Liverpool and Panama have both responded to the growth of the global container ship fleet with major investment programmes in recent years to accommodate newer generations of container ships. The opening of the expanded canal has the potential to open up new markets for trade and has the potential to shift international trade patterns.”
“We see exciting times ahead for Liverpool, with improved trade connectivity and business opportunities between the UK and South America,” he continued, “which will not only generate economic growth but also create jobs and increase revenues.”
0
Tags: liverpool container terminal Container panama canal
Visit Home
Send to friends
Print
Newsletter
Share this news