Pakistani firefighters were battling on Wednesday to douse a fire still raging more than a day after a series of explosions on a decommissioned oil tanker, with the death toll rising to 18, and more than 20 workers missing, officials said. 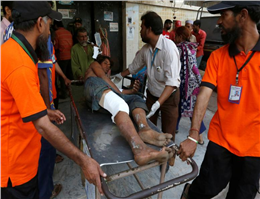 According to MANA, Tuesday's initial blast occurred as workers were welding near a fuel tank in a shipbreaking yard in Gaddani, 45 km (28 miles) northwest of the southern port city of Karachi, said Zulfiqar Bokhari, a local administration official.
At least 58 people were injured in the blasts, and between
20 and 25 people were still missing, he added.
Laborers in Gaddani often work in poor conditions without basic protective gear.
0
Tags: Pakistan oil tanker
Visit Home
Send to friends
Print
Newsletter
Share this news