A huge explosion of an oil tanker at a shipbreaking yard in Gaddani, Pakistan has killed at least 12 workers and injured more than 50 others, reports said. 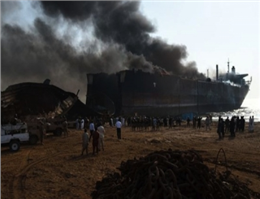 The blast occurred in the fuel tank of the oil tanker, which was moored in Gaddani, 45km northwest of the port city of Karachi, MANA correspondent reported cited by Reuters. It was still unclear the name and owner of the ship.
“There’s an unclear number of workers said to be trapped in the burning ship,” Basheer Mehmoodani, president of the shipbreaking workers union, was quoted saying. It is feared that the death toll may rise further.
Firefighters, the air force and navy were on site to put out the raging blaze, it was reported.
Workers at shipbreaking yards, particularly those in Pakistan and Bangladesh, often work in hazardous and poor conditions without basic protective gear.
0
Tags: tanker Oil Pakistan explosion
Visit Home
Send to friends
Print
Newsletter
Share this news