A container vessel that spent months sitting off Canada's west coast due to the collapse of South Korea shipping company Hanjin docked in Vancouver on Thursday, according to union officials and ship tracking data. 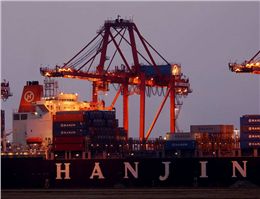 According to MANA, The Hanjin Scarlet arrived at DP World's Centerm terminal within the Port of Vancouver by early afternoon, according to Thomson Reuters ship tracking data.
The vessel, with nearly 800 containers on board, had been sitting some 45 km (28 miles) outside Prince Rupert for several months, said Peter Lahay, an inspector and coordinator with the International Transport Workers Federation.
Meanwhile, the Hanjin Vienna also remains at anchor off Victoria, British Columbia, according to ship tracking data. Local reports say that the Vienna is also arrested. According to an advisory on Hanjin's website, it is set to discharge in Vancouver on Nov 3.
0
Tags: Port of Vancouver Hanjin Shipping
Visit Home
Send to friends
Print
Newsletter
Share this news