Offshore services vessel operator Tidewater has won an extension of three weeks to reach a deal with its lenders and bondholders before it will be forced to consider Chapter 11 bankruptcy. 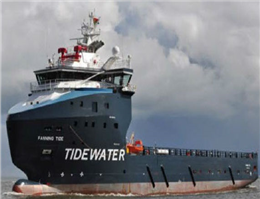 Tidewater cites projected levels of offshore drilling activity, a primary driver of activity within the offshore service vessel industry, as having led to the need for further negotiation, MANA correspondent reported.
The company operates over 300 vessels including AHTS, PSVs, crew boats and specialty OSVs. Approximately 60 percent of its revenue is derived from drilling support activity and 40 percent from non-drilling related activity, such as support of production and construction activity.
“While the company will continue to work toward amendments to its various debt arrangements that will be acceptable to all parties, there is a possibility that the lenders, noteholders and the company will not be able to negotiate new debt terms that are acceptable to all parties, in which case the company will have to consider other options, including a possible reorganization under Chapter 11 of the federal bankruptcy laws.”
Tidewater suffered a first quarter net loss for the period ended June 30, 2016, of $90 million on revenues of $168 million. For the same quarter last year, net loss was $15 million on revenues of $305 million. The immediately preceding quarter ended March 31, 2016, had a net loss of $82 million on revenues of $184 million.
0
Tags: offshore tidewater America bankruptcy osv
Visit Home
Send to friends
Print
Newsletter
Share this news