The shipbuilding orderbook at China’s shipyards has continued to deflate in the first nine months of 2016 as newbuilding deals slowed amid the protracted recession of the shipbuilding industry. 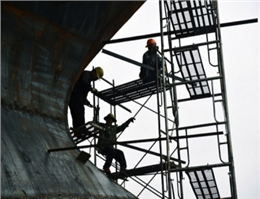 From January to September this year, the order backlog at Chinese shipyards was recorded at 109.3m dwt of vessel capacity, a drop of 18.1% year-on-year, according to MANA cited by figures from China Association of the National Shipbuilding Industry (Cansi).
The latest nine-month order backlog also shrank from 114.21m dwt seen in the January-August 2016 period, and was down from 123.04m dwt registered as at end-2015.
New orders received at Chinese yards inched up 2% year-on-year to 18.52m dwt in the first nine months, as the severely oversupplied market curbed newbuild orders, Cansi data showed. This compared to a sharp 18.7% year-on-year surge in new orders for the January-August 2016 period.
In completed tonnage, Chinese shipbuilders produced 24.93m dwt of vessel capacity from January to September 2016, a fall of 15.1% compared to the same period of 2015.
0
Tags: Shipbuilding china orderbook
Visit Home
Send to friends
Print
Newsletter
Share this news