A partnership consisting of chemical companies and Port of Rotterdam is looking to build a waste-to-chemicals plant that will produce methanol from synthesis gas generated from residual waste. 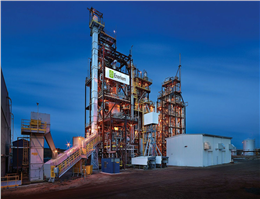 The parties will work together optimizing and completing feasibility of the business case, which includes the selection of the exact location within the port of Rotterdam and the start of the application process for the necessary permits. This phase is expected to result in a conclusive decision on the construction of the plant in the first half of 2017.
The new chemical plant will be based on technology developed by Enerkem that converts residual waste into methanol, a raw material that is used in the chemical industry. The methanol can then be converted into substances such as acetic acid, thickening agents and dimethyl ether. These chemicals are currently generated almost entirely from fossil fuels to which the planned facility will provide a sustainable alternative.
Enerkem’s technology has been extensively tested and developed over the past 15 years. A commercial facility has begun operation in 2015 and was recently certified according to the International Sustainability and Carbon Certification (ISCC) system.
If the consortium proceeds with the launch and construction of the waste-to-chemicals facility in 2017, this will represent a significant step towards a sustainable and circular approach to waste management in Rotterdam, says the port.
0
Tags: waste-to-chemical plant Dutch Rotterdam
Visit Home
Send to friends
Print
Newsletter
Share this news