IRISL Fleet Overcomes 95 % of Past Problems

The director and the head of the board at Islamic Republic of Iran Shipping Line (IRISL) stated that currently we are dwelling at a bright point in Iran's history thanks to the government's tact, negotiation team's sophistication and the strategic management of grand leader and the president. 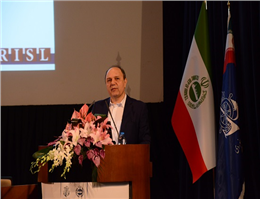 In the inauguration ceremony of 24thConference for Coordinating Maritime Organizations, MANA reported, Dr. Mohammad Saeedi asserted that based on the resistance economy strategy, what we need to achieve to improve Iran is not achieved through importing; rather, we need to attain innovative technology and develop our knowledge-based economy.
Making effective use of domestic, regional and international capacities is a necessity, Dr. Saeedi asserted, and currently, we have managed to access the 600-million-people market of Commonwealth of Independent States (CIS) countries, thanks to the activation of North–South Transport Corridor. Dr. Saeedi, also, considered the revival of the Silk Road to be a significant bridge between the East and the West, and proposed that Iran could be the main channel of this transportation route.
Making a reference to the post-JCPOA opportunities, the IRISL director stressed that currently, the tactfulness of the executive system, the smartness of the nuclear negotiations team and the president's and grand leader's strategic management skills have led Iran to flourish and thrive and experience a shining point of its history.
Utilizing this opportunity, he added IRISL managed to not only sign memoranda of collaboration with 5 eminent international shipping lines but also to commence joint operational activities with them. At the moment, IRISL is in pursuit of the cooperation with high-ranking international corporations to develop Iran's operation terminals and make up for where it has fallen behind.
IRISL director emphasized that the policies of Ministry of Roads & Urban Development in Rouhani's administration have been precise and thorough, and they have well managed to make the best out of domestic and foreign opportunities. He promised that IRISL will also continue utilizing these opportunities and promote its international position to 20 or higher.
Dr. Saeedi asserted that reviving IRISL's relationships with prominent international classification firms was one of the most paramount achievements of JCPOA. We have made it clear to these institutes, he added, that their alignment with Iranian companies is an absolutely necessary condition for them if they wish to expand their activities in Iran. Another significant post-JCPOA, in Dr. Saeedi's view, was the revival of reinsurance coverage for ships. He stated that his organization was able to attain a 580-million-dollar multi-faceted insurance coverage for Iran's national fleet. As a result of these measures, he further asserted, IRISL ships commute to ports in every corner of the world with no restrictions.
Promising that the upcoming month will witness the announcement of good news in the maritime sector, Iran's national fleet director strongly stressed that 95 % of the problems with IRISL fleet had already been solved, negotiations are in progress to solve the remaining 5 %, as well.
Dr. Saeedi regarded the reopening of IRISL foreign representative networks as an achievement of post-JCPOA era, and reminded us that at the sanctions' era, IRISL was only active in East Aisa line; yet, he added that not only have IRISL already revived almost all its representatives around the world, but it has opened some new representatives in different ports.
In order to expand its services, Dr. Saeedi submitted, IRISL has established international joint-venture companies in the ports of Italy, Hamburg, Singapore and China. Moreover, IRISL has recently started collaboration with the largest Turkish line. This collaboration, he added, aims at expanding IRISL's activities in the Mediterranean and Southern Europe. Dr. Saeedi counted the revival of IRISL representative in South Africa and expanding its activities in the southern ports of Persian Gulf as the other plans of his organization for the future.
Referring to his recent trip to South America with Iranian state secretary, Dr. Saeedi asserted that IRISL fleet commutes freely to and from the eastern ports of this continent. He added that IRISL is currently performing negotiations to activate its travel routes to the western ports of this continent through Chili-China line.
Proposing that the development of bunkering industry is a significant IRISL policy in the post-JCPOA era, Dr. Saeedi stressed that his organization is attempting to meet the needs of both Iran and the region, thanks to its coordination with Gheshm Free Zone.
0
Visit Home
Send to friends
Print
Newsletter
Share this news