Hyundai Heavy Industries announced the delivery of a new LNG carrier for Knutsen – and it expects the ship will be significantly more efficient. 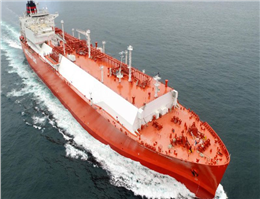 Hyundai says that the La Mancha Knutsen has a new system for compressing and reliquefying boil off gas (BOG), allowing it to reuse 1,600 tons of natural gas every year which would otherwise be wasted, MANA correspondent reported.
This should yield a net savings of $1 million annually or $25 million over the life of the vessel, HHI says, as conventional systems are only able to reliquefy part of the gas.
Hyundai first announced the system in February of last year, and it claims that the system could save a vessel operator 50 percent of what they would spend on fuel if they were burning HFO or MGO instead.
The investment in fuel-saving technology fits with Knutsen's overall strategy of aiming for efficiency and cost reduction. The shipping company is also working with tech firm Enova to analyze shipboard energy consumption in detail.
"One ship can use the same amount of energy as a small town. Clearly it has costs, both for us and the environment," said Knutsen quality manager Geir Hagen in June. "Our goal is to be ahead of the competition and the more energy we save, the more we save on equipment and maintenance – and the charterer saves money.
0
Tags: norway LNG hyundai south korea
Visit Home
Send to friends
Print
Newsletter
Share this news