Bigger ships may be using the newly widened Panama Canal, but they’re not bypassing Oakland to get there, said the Port as it announced that the wider canal locks have not dented its business. 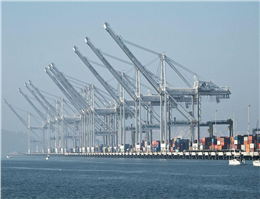 According to MANA and Port data, Oakland vessel traffic has gone up since the Canal got bigger June 28. The trend refutes warnings that larger ships would detour around the U.S. West Coast given Panama access.
The received 310 vessel calls in July and August. Those were the first two months of operation for Panama’s enlarged waterway. During those same months in 2015, only 276 ships visited Oakland. That means the Port’s vessel traffic has increased 12 percent, year-over-year, since the canal expanded.
Oakland cargo volume has increased, too. July and August were two of the Port’s three busiest months this year for container-handling.
Port of Oakland Maritime Director John Driscoll said the Port is not insulated from Panama’s competitive threat. However, Oakland has advantages making cargo migration to the canal unlikely. They include:
More than 80 percent of containerized imports discharged in Oakland.
Export orientation: Half of Oakland’s cargo is containerized exports. There’s no shorter route to markets in Asia than through Oakland.
Much of the nation’s import cargo is discharged at Southern California ports, then transported east by rail. The Panama Canal provides an alternative to those gateways: direct access to U.S. East Coast ports.
0
Tags: Oakland America expanded panama canal
Visit Home
Send to friends
Print
Newsletter
Share this news