Pirates stormed a container ship off the coast of Guinea on Wednesday, making off with money and some of its cargo but leaving the crew unharmed, the government said. 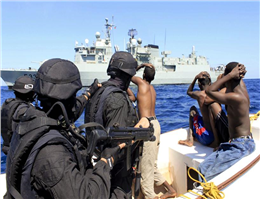 They fired guns and briefly held the crew hostage while they were looting the ship named Wendok, Guinea government spokesman Albert Camara said by telephone.
He did not have details of the flag Wendok was flying under, the company running it, what its cargo was nor the nationalities of the crew.
He said that Guinea's navy had been alerted but that the pirates had escaped before it could catch them.
Security experts class West Africa's waters, especially off Nigeria where most of the pirates originate, as some of the world's most dangerous, with attackers often targeting oil tankers as well as hostages to ransom.
0
Tags: container shipping Pirates
Visit Home
Send to friends
Print
Newsletter
Share this news