MAJOR Indian ports under administrative control of the country's ministry of shipping posted a 4.3% year-on-year rise in containers handled, at 3.6m teu for the April to August period in 2016. 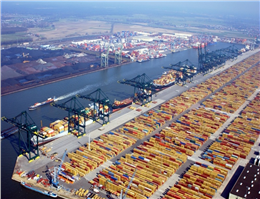 These major ports, comprising Kolkata, Paradip, Visakhapatnam, Kamarajar (Ennore), Chennai, VO Chidambaranar, Cochin, New Mangalore, Mormugao, Mumbai, JNPT and Kandla, handled 3.4m teu in the year-ago period, according to data from the Indian Ports' Association cited by MANA News Agency.
The top two ports in terms of box throughput handled between April and August this year were JNPT, with 1.9m teu versus 1.87m teu a year ago; and Chennai, at 632,000 teu versus 669,000 teu in the 2015 period.
India has been one of the few bright spots for the global import/export market in containerised trade growth in recent years, and this trend has continued into 2016, with the country witnessing a double-digit jump in its box traffic.
According to a new report published by the world’s largest container shipping line, Maersk Line, India’s foreign trade volumes in the first six months of 2016 continued to go from strength to strength, with numbers up 11%. In the corresponding period of 2015, volume growth was recorded at 6%.
The plans include financial aid worth Rs370m ($5.5m) to build new berths to handle increased passenger services and coastal cargo volumes near Porbandar; Rs150m in financial support to develop skillsets and enhance safety measures for workers in the ship recycling yards at Alang; resources to establish a marine shipbuilding facility in the proximity of Bhavanagar; Rs1.17bn to develop a fisheries harbour near Veraval and for ro-ro ferry dredging work between Ghogha and Dahej; Rs350m to build a road to link Bhavanagar to Sosiya, the Alang ship recycling yard under the Bharat Mala project; and Rs2bn to provide workers with accommodation facilities and hospitals.
0
Tags: india Container Container Volume throughput
Visit Home
Send to friends
Print
Newsletter
Share this news