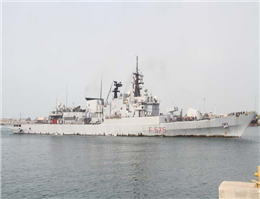 MANA correspondent reported that Rear Admiral Hossein Azad, the commander of Iranian Navy First District, officially welcomed this ship, and stated that navies are international organizations in every country, and it is customary for navy forces to travel to other countries via a fleet of naval ships and aircrafts. The major aim of these travels is to fortify maritime collaborations, performing joint maritime exercises or carrying out joint maneuvers between 2 or more countries.
In a meeting with Italy’s ambassador to Tehran, Mauro Conciatori, and the country’s military attaché, Commander of Iran’s First Naval Zone Rear Admiral Hossein Azad said the Italian frigate has been dispatched to the Islamic Republic with the purpose of improving political, cultural and military relations
Iran’s Navy has also an active presence in the international scene by holding naval meetings and making various voyages while hosting the warships of different countries every year, the commander said.
He added that the enemy has always sought to undermine Iran and spread Iranophobia; however, different countries dispatch their military and naval forces to Iran and participate in joint projects as the high level of security in the Islamic Republic has been proved to neighboring and regional countries and the entire world.
0
Visit Home
Send to friends
Print
Newsletter
Share this news