China COSCO Shipping will not raise its shipping prices as it had planned, reports Caixin quoting shipping agency representatives at Shanghai’s port. 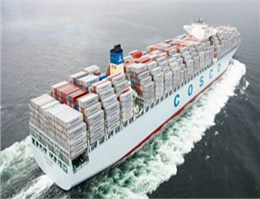 The shipping giant has given up its plan to take advantage of Hanjin Shipping (117930.KS)’s bankruptcy by raising prices after a surge of international cargo prices turned out to be temporary, MANA correspondent reported.
The shipping market witnessed a spike in prices in the first few days after Hanjin filed for court receivership on Aug. 31.
One container shipped from China to the western coast of the United States, for instance, cost about $695 shortly before Hanjin filed for receivership. But on Sept. 2, the price jumped to $949, an increase of nearly 40 percent.
"After Hanjin Shipping was reported to file an application for the commencement of rehabilitation proceedings to the court, we have taken all measures to reduce the negative impact arose on our customers. The latest status will be released regularly," says a statement from the comany.
Formed through the merger of China's two largest shipping companies in February, COSCO Shipping owns the world's fourth-largest container shipping fleet by capacity, run by its flagship listed unit, China COSCO Holdings.
COSCO Shipping itself is among the most indebted of the global shipping firms, according to Thomson Reuters data, but it is also one of China's largest state-owned firms, employing 330,000 people. Sun Jiakang, executive vice president of China's biggest shipping company, told Reuters that its finances are improving.
0
Tags: cosco COSCO Shipping china Freight Rate
Visit Home
Send to friends
Print
Newsletter
Share this news