Asia-Europe rates down more than 20%

The latest Shanghai Containerised Freight Index shows rates on the Asia-north Europe and Asia-Mediterranean trades falling by more than 20% to $764 per teu and $667 per teu respectively. 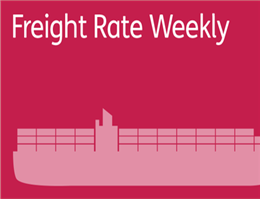 According to MANA,Weak demand growth on the trade has been the story for much of the peak season, not just on the Asia-north Europe trade but also on the Asia-Mediterranean, where Hanjin has a much stronger presence.
Spot rates on routes from Asia to either coast of the US have rocketed since the start of the month and even a slight drop-off on the SCFI this week, where rates on the Asia-US east coast and Asia-US west coast trades fell 0.6% to $2,433 per feu and 0.9% to $1,726 per feu respectively.
The absence of Hanjin on the transpacific, where its presence was inherently strong — representing approximately 7.2% of overall capacity — should ensure that the current spot market level is sustained in the weeks ahead as China’s Golden Week prompts a slowdown in demand.
With the Asia-Europe trades witnessing significant rate erosion this week, the SCFI Index, covering 15 global trade lanes out of Shanghai, fell 7.6% to 733.56 points.
0
Tags: Asia-Europe
Visit Home
Send to friends
Print
Newsletter
Share this news