Freight rates for very large crude carriers (VLCCs) are likely to remain under pressure next week as charterers drip-feed cargo in the face of surplus tonnage,Reuters reported. 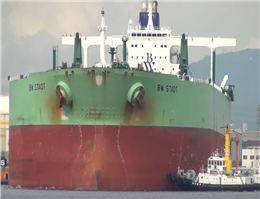 The market is going sideways. Owners are trying to lift rates but it is very difficult because there are a lot of discounted vessels available, MANA correspondent reported.
These discounted ships include older vessels, tankers returning to service following dry docking and new deliveries from shipyards. Operators of these vessels accept cheaper rates so the ships can gain immediate employment.
"The orderbook for supertankers is very scary - tanker demand growth will again be at a slower pace than most anticipate/wish for," said Peter Sand, chief shipping analyst at shipping industry lobby group Bimco.
The VLCC fleet will grow by 18.2 percent in the next three years from 208.5 million deadweight tons (DWT) to 264.4 million DWT by 2019, figures from shipping services firm Clarkson showed.
By comparison, global seaborne crude oil volumes have risen four percent this year from 2015, Clarkson data showed.
The discounted vessels have dampened VLCC rates with the average now down to around $18,000 per day compared with the 2016 daily average of $41,000 and $64,846 per day in 2015, Clarkson data showed.
VLCC rates from the Middle East to Japan slipped to around 32.50 on the Worldscale measure on Thursday from about W33.75 last week and the lowest since September 1.
Rates for VLCCs from West Africa to China were unchanged at around W43 on Thursday, although there was a brief rally earlier this week.
Charter rates for an 80,000-dwt Aframax tanker from Southeast Asia to East Coast Australia rose to around W67.50 on Thursday, the highest since Aug. 26, compared with W60 the same day last week following increased cargo demand, brokers said.
0
Tags: VLCC Asia tanker Freight Rate
Visit Home
Send to friends
Print
Newsletter
Share this news