The Malta-flagged oil tanker Seadelta has departed Libya’s port of Ras Lanuf carrying 781,000 barrels of crude oil as exports at the port resumed for the first time since 2014, Bloomberg cited sources close to the matter. 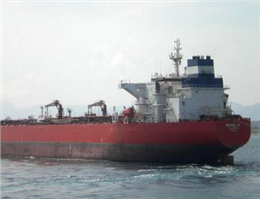 The vessel, which was earlier withdrawn to a safe distance from the port due to a fresh outbreak of fighting in the area, was able to resume its operations after the conflicts at the site subsided, MANA correspondent reported.
The 113,000 dwt tanker is currently on its way to Italy, where the cargo will be offloaded. According to AIS data provided by MarineTraffic, the vessel is scheduled to reach Trieste on September 24.
Mustafa Sanalla, the chairman of Libya’s National Oil Corporation (NOC), earlier said that the country’s oil production could be increased to 600,000 b/d within a month, and to some 900,000 b/d by the end of the year from the current production capacity of around 290,000 b/d.
He further said that the production could reach up to 1.2 million b/d within twelve months, however, “this is dependent on receiving essential funds from the budget and on the Oil Crescent ports and the closed pipelines in the southwest being opened and kept open.”
0
Tags: tanker Libya italy Oil
Visit Home
Send to friends
Print
Newsletter
Share this news