Another Disaster in Boat Carrying Migrants

A boat carrying almost 600 people capsized off Egypt's coast on Wednesday, killing at least 43, in the latest disaster among migrants trying to reach Europe. 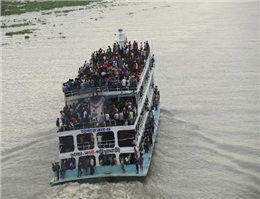 According to MANA cited by Reuters, the boat sank in the Mediterranean Sea off Burg Rashid, a village in the northern Beheira province. Officials said 31 bodies had been found, 20 men, 10 women and one child. A Reuters correspondent later saw a fishing boat bring in 12 more bodies, bringing the total so far to 43.
Rescue workers have so far saved 154 people, officials said, meaning about 400 could still be missing.
"Initial information indicates that the boat sank because it was carrying more people than its limit. The boat tilted and the migrants fell into the water," a senior security official in Beheira told Reuters.
The boat had been carrying Egyptian, Sudanese, Eritrean, and Somali migrants, officials said.
"I am not going to leave until I see Mohamed," Ratiba Ghonim wailed. Her 16-year-old brother had left an impoverished village nearby in search of a better life.
"It is his destiny to leave yesterday and come back dead today. They still haven't pulled his body out of the water."
Egyptian Prime Minister Sherif Ismail said all resources possible would be directed into the rescue mission and that those responsible had to be brought to justice.
It was not immediately clear where the boat had been heading. Officials said they believed it was going to Italy.
More than 2,800 deaths were recorded between January and June, compared with 1,838 during the same period last year.
World leaders, including Egyptian President Abdel Fattah al-Sisi, gathered in New York this week at the United Nations General Assembly to discuss the migrant crisis.
Some 1.3 million migrants reached Europe's shores last year fleeing war and economic hardship, prompting bitter rows among states over how to share responsibility.