Panama, the world’s largest flag state, has acceded to the Hong Kong International Convention for the Safe and Environmentally Sound Recycling of Ships (HKC). 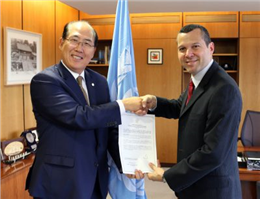 The convention covers the design, construction, operation and preparation of ships so as to facilitate safe and environmentally sound recycling, without compromising the safety and operational efficiency of ships, MANA correspondent reported.
H.E. Arsenio Dominguez, Ambassador, Permanent Representative of Panama to IMO, met IMO Secretary-General Kitack Lim to deposit the instrument of accession to the convention on September 19.
Panama’s accession is a significant step forward for the HKC as around 330 million dwt, or 18 per cent of the global merchant fleet by gross tonnage sails under this country’s flag.
The four countries which acceded to the convention prior to Panama – France, Belgium, Norway, and the Republic of the Congo – cover around 2 per cent of the global merchant fleet gross tonnage.
Denmark has also recently announced that it plans to accede to the convention in the spring of 2017.
The convention, adopted in 2009, is open for accession by any state. It will enter into force 24 months after the date on which 15 states, representing 40 per cent of world merchant shipping by gross tonnage.
0
Tags: HKC Panama Hong Kong
Visit Home
Send to friends
Print
Newsletter
Share this news