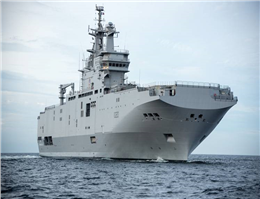 According to MANA, By 2020, DCNS will have supplied seven combat vessels to Egypt, thus contributing to the modernization of the Arab Republic of Egypt's defense system.
On October 10, 2015, DCNS signed a contract with the Ministry of Defense of the Arab Republic of Egypt for the supply of two Mistral-class Landing Helicopter Dock vessels (LHDs), the first of which, LHD Gamal Abdel Nasser, was delivered June 2, 2016.
On this occasion, the Egyptian and French navies will participate in a joint exercise. Since June, 180 Egyptian sailors have been receiving training in Saint-Nazaire on this LHD.
Able to conduct a wide range of civil and military missions, the Mistral-class LHD is a vessel that responds to the needs of numerous navies thanks to its versatility. With a length of 199 meters and a speed exceeding 18 knots, the Mistral-class LHD vessel is characterized by its high capacity for the transportation of troops, equipment, heavy helicopters and landing craft, which it is capable of projecting around the world. It is equipped with an electric propulsion system that uses pods. It also has an onboard hospital, and can carry out large-scale humanitarian missions.
The fruit of a close collaboration between DCNS and STX, the three first LHDs, Mistral, Tonnerre and Dixmude were delivered to the French Navy in 2006, 2007 and 2012.
0
Tags: Helicopter Carrier
Visit Home
Send to friends
Print
Newsletter
Share this news