A Chance for Retrieving Our Big Customers 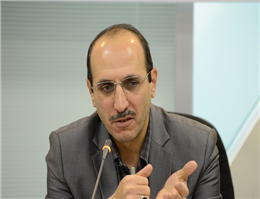 Currently, the fleet of Islamic Republic of Iran Shipping Lines(IRISL) can load the cargo from Japan, Korea and Europe Ports and sail to the ports throughout the world.
In an interview with MANA reporter ,The director of container transport company, a subsidiary of Islamic Republic of Iran Shipping Lines(IRISL) stated: Joint Comprehensive Plan Of Action( JCPOA)has provided an opportunity for Retrieving Our Big Customers , in a way that with resuming shipping lines activities and sailing to Europe, Japan, South Korea ports as well as connection India to West of Africa, we are actively present in the international routes.
Stating that IRISL fleet is able to load from Korean ports, Captain Hamzeh Keshavarz further remarked: with launching Japan line, our vessels could carry Japan cargo towards South Korea.
The director of container transport company pointed out: in the last year and in the light of agreement on the Iranian nuclear program, we witnessed Iran’s first container ship sailed to Europe carrying a cargo of petrochemical products.
Making a reference to removing of banking deterrents , Keshavarz proposed: at the present, seven European banks have commenced their cooperation with Iran .
He emphasized: the expansion of activity in Europe line could be regarded as a substantial achievements of JCPOA.
Keshavarz asserted: a new line from India to Iraq has been established which carry goods from India to Bandar Abbas as well as load China, Korea and Europe cargo from Bandar Abbas toward Iraq and from Iraq sail to Bandar Imam Khomeini and India.
The director of container transport company also stated: based on the released statistics in July 2016, the international transport has increased as much as 324 percent, which establishments of the new service line of India –Iraq as well as implementation of JCPOA could be considered as the main reasons of this growth, he continued.
According to The director of container transport company ,connection India to the West of Africa is an important purpose of this company in the future.
0
Tags: JCPOA
Visit Home
Send to friends
Print
Newsletter
Share this news