A Transpacific shipping route linking Asia and the US will add weekly US Port of Oakland stops, beginning on November 6, 2016. 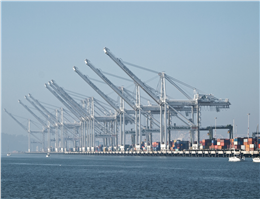 According to MANA,The service is expected to bring an additional 50 vessel arrivals to Oakland annually. That could increase Oakland cargo volume by as much as 30,000 TEUs a year, according to the port authority. In 2015, the Port of Oakland handled the equivalent of 2.3 million TEUs.
Oakland will thus become the sixth stop in the Calco-C service, which connects ports in Vietnam, China and California.
The service is operated by Japanese shipping company K Line, Taiwan’s Wan Hai Lines and Singapore’s Pacific International Lines (PIL).
Other ports in the service include Cai Mep in Vietnam, Xiamen, Yantian and Nansha in China, and the Port of Long Beach in California.
The three ocean carriers have deployed seven ships on the service, with a capacity ranging from 8,000 to 9,000 TEUs. The vessels will make weekly calls at the port’s Oakland International Container Terminal.