Joint Patrols to be Started This Year

The Indonesian navy is currently drafting routes for joint patrols and plans to start implementing coordinated patrols with the Philippines and Malaysia this year as part of efforts to step up maritime defense in regional waters amid the risks of piracy and hostage-taking. 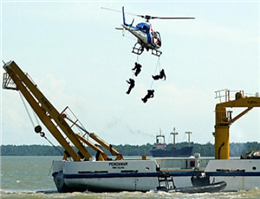 The trilateral maritime agreement, signed by the Indonesian, Philippine and Malaysian defense ministers during a ministerial meeting in Bali, is aimed at providing security in the regional waters, MANA correspondent reported.
The patrols will extend to the piracy-prone waters of the Sulu Sea, to realize the trilateral maritime agreement signed by the three countries in August. Defense Minister Ryamizard Ryacudu was quoted as saying.
"I believe we can start the coordinated patrols this year. I will meet the Malaysian Defence Minister in the near future [to further discuss the plan]," Ryamizard said.
Aside from drafting the coordinated patrol routes, the Navy is also mulling the safest routes for commercial ships to use in the area, especially those traveling back and forth among the three countries.
At least nine Indonesians are still being held captive by Philippine militants from the Abu Sayyaf group who have demanded ransoms in exchange for the hostages.
0
Tags: Indonesia malaysia philippines piracy defense Minister
Visit Home
Send to friends
Print
Newsletter
Share this news