Old Vessels of Merchant Fleet to be Demolished

VesselsValue.com (VV) calculated that as of August, roughly one in six merchant vessels worldwide were worth their demolition value – a reflection of the dire state of the offshore, dry bulk and container markets. 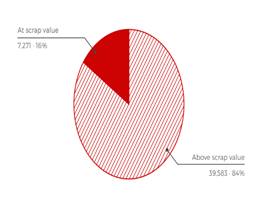 According to MANA, the OSV fleet is the most troubled, with nearly 30 percent of offshore supply vessels worth no more than their scrap content, followed closely by smaller bulk carriers. The container fleet comes in at nearly twenty percent of vessels worth only demolition value – almost one in every five box ships trading.
Lebanese-owned vessels were the most likely to be at demo value by percentage of fleet: 100 of the 129 ships held by Lebanese firms are worth scrap only, or 78 percent. Syria and Malta follow at 71 and 43 percent respectively.
BIMCO recently forecast that 400,000 TEU of container ships would be demolished in 2016, double last year's figure. Drewry has put the number as high as 450,000 TEU and VV’s numbers show that much of the older fleet may yet go to demolition rather than resale.
GMS Weekly reported that Bangladeshi demo prices for general cargo vessels were averaging $250/ldt as of early September, down from $280/ldt in May but an improvement over the $220/ldt paid in March – illustrating price fluctuations of up to 25 percent over the course of the year to date.
0
Tags: scrapping Bangladesh Container osv dry bulk
Visit Home
Send to friends
Print
Newsletter
Share this news