The first of ten ship-to-shore (STS) cranes at the APM Terminals Los Angeles Pier 400 facility was raised 33 feet, making it the tallest port crane in North America, ahead of regular Ultra-Large Container Vessel (ULCV) calls in the trans-Pacific trade lanes, according to the terminal operator. 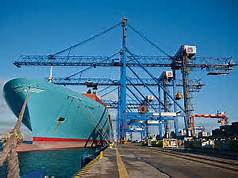 According to MANA, APM Terminal said that the crane, which will use 60% less energy than conventional lighting systems, is expected to be ready for vessel operations in the next few months.
The crane heightening project would allow these mega ships, carrying up to 20,000 TEUs, to dock at the pier. The largest ships that could be served prior to the upgrade were vessels carrying an average of 13,000 TEUs.
APM Terminals Pier 400 Los Angeles operates a total of 14 STS cranes. The ten retro-fitted cranes will enable handling vessels that have a beam of 23-containers wide, and stacked ten containers high above deck.
“The Los Angeles crane extension project, representing an investment of USD 40 million keeps APM Terminals at the forefront of infrastructure improvement and upgrades in US port operations,” said APM Terminals CEO, Kim Fejfer.
The throughput at APM Terminals Pier 400 Los Angeles, which opened in 2002, reached 2.48 million
0
Tags: APM
Visit Home
Send to friends
Print
Newsletter
Share this news