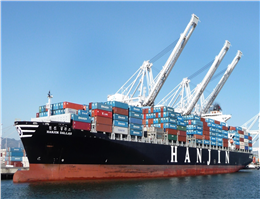 According to MANA, THE impact of Hanjin’s collapse has finally emerged on the Asia-Mediterranean trade lane, with spot rates rising more on this route than any other, according to figures from the Shanghai Containerised Freight Index, which has published early this week ahead of holidays in China tomorrow.
In the initial aftermath of the application for receivership by the Korean Line, spot rates on transpacific trades, where Hanjin had its largest market share, rose by 50% to $1,746, the highest level in over a year.
Asia-Europe rates, where Hanjin played a role within the CKYHE alliance, also climbed back up to nearly $1,000 per teu, representing a rise of 36.5%.
That forecast has now proved to be accurate, with Asia-Mediterranean rates up another 22% this week to $860 per teu.
0
Tags: Hanjin
Visit Home
Send to friends
Print
Newsletter
Share this news