The director of Sistan-Baluchestan Province Cultural heritage, Handicraft and tourism announced that Iran-Pakistan Maritime Passenger Line would be launched in the next year. 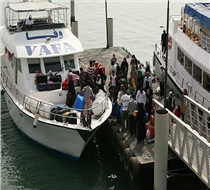 In an interview with MANA reporter, Dr. Mostagh Gohari stated: given the close distance between Chabahar Port -Karachi, there is a necessity to establish a Maritime Line for expanding the ties between Iran and Pakistan.
He continued: in the light of plans, we would be witness the launching of Maritime Passenger Line in the route of Chabahar Port -Karachi in the next year.
This official figure proposed: with launching Iran-Pakistan Maritime Passenger, not only we would be witness promote the ties between the two nations but it also would bring about tourism industry development.
0
Tags: Maritime Passenger Line
Visit Home
Send to friends
Print
Newsletter
Share this news