In a statement released Monday, BIMCO said that shipbuilding orders have fallen to the lowest level in two decades. 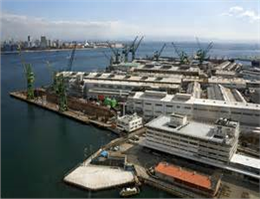 Accordinmg to MANA,“Since the high contracting in 2013, BIMCO expected the shipyards could come under pressure. This expectation became a reality at the start of 2016, with the first quarter contracting the second lowest [by compensated gross tonnage] in 20 years," said chief shipping analyst Peter Sand.
Tanker and container ship ordering led the decline, both down about 80 percent worldwide.
By nation, Japanese and South Korean yards are the worst hit by far, suffering a nearly complete collapse in ordering activity with the loss of 86 percent of their new business volume by CGT (compared with the same period last year). China lost about half.
Further, BIMCO notes that many of the vessels already on order at Chinese and Japanese yards are for stressed markets – dry bulk, container and offshore – and vulnerable to delay or cancellation. This affects the transfer of a shipowner's heavy-tail final payment, which can amount to the great majority of the yard's revenue from each ship.