One person was killed while four others sustained injuries after a lifeboat fell from the world’s biggest cruise ship, the Harmony of the Seas. 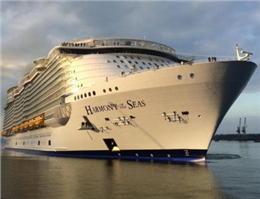 The incident occurred during a lifeboat drill while the 362-meter-long vessel, which is owned and operated by the Miami-based cruise company Royal Caribbean Cruises, was docked at the port of Marseille in France, MANA correspondent reported.
“We are sorry to share the sad news that a crew member aboard Harmony of the Seas has died of injuries suffered during a lifeboat drill conducted while docked at the port of Marseille, France,” a Royal Caribbean spokesperson said, adding that “four other crew members received medical treatment in the same incident.”
The vessel then received criticism as a number of media reports claimed that the biggest cruise ship in the world was not ready to set sail yet, while passengers present during the voyage complained via social media citing various ‘flaws’ aboard the new cruise ship.
The tragic news comes on the back of Harmony of the Seas’ pre-inaugural four-day voyage from Southampton to Rotterdam in May 2016, when the vessel was dubbed by some as the “Calamity of the Seas”. The 5,479-passenger Harmony of the Seas deployed on its official maiden voyage later in May.
0
Tags: Harmony of the Seas Cruise Ship Miami
Visit Home
Send to friends
Print
Newsletter
Share this news