The director of Khazar Sea Shipping announced that Aktau New Port has been officially inaugurated, and as well, the Iranian Ship of VIONA has docked at this port. 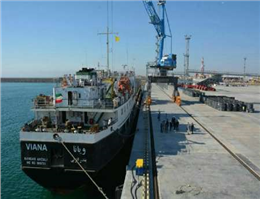 In an interview with MANA correspondent, Aliakbar Ghonji stated that Aktau New Port has been established by private sector investors of Kasakstan, and through the docking of VIONA, property of Khazar Sea Shipping, this port was officially inaugurated.
Currently, he added, grains silos have been constructed in this port and it has become operational in three wharf posts.
Moreover, Ghonji pointed out that the first Khazar Sea Shipping vessel called "Perin" docked at Aktau port at a piloting phase in June this year. Yesterday, the Iranian ship of VIONA docked at this port at the presence of Iran's head consulate, Khazar Sea Shipping representative, and deputy governor of Mangystau Province. By this docking, this port was officially inaugurated.
Ghonji further stated that the new port enjoys a far vaster off-shore area compared to other Aktau ports, and as well, the number of the wharfs in this port would reach 6 in the future.
In the end, he stressed that the new port has been constructed using state-of-the-art technology and it is well capable of embarking and disembarking various types of bulk cargo as wheat and general cargo.
The Iranian ship of VIONA, with the capacity of 3800 tons, has docked at this port for being embarked.
0
Tags: Aktau New Port Iranian Ships
Visit Home
Send to friends
Print
Newsletter
Share this news