The Houston Ship Channel has re-opened after a tanker fire and fuel spill caused it to shut down for 14 hours on Tuesday. 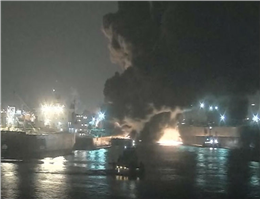 According to MANA, The unladen vessel, Aframax River, is suspected to have hit an object, possibly a submerged sewer line.

The incident resulted in one of the vessel’s fuel tanks being punctured. The cause of the fire is not yet known, but no injuries have been reported. Flames reached as high as 200 feet.
"This incident could have been much worse, but was mitigated due to the prompt and effective response of two Port of Houston Authority fire boats," said Captain Peter Martin of the U.S. Coast Guard.
The owner and operator of the tanker is Greek company Aframax River Marine
0
Visit Home
Send to friends
Print
Newsletter
Share this news