Aframax crude tankers saw their earnings gain ground Tuesday as they continued to pull up from a deep trough. 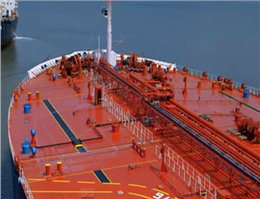 According to MANA, But long-range (LR) products tankers headed in the opposite direction, with LR1 spot earnings falling 10% in one day.
The Baltic Exchange’s average time-charter equivalent (TCE) for the sector gained 13.2% today to reach just over $8,130 per day.
That marks a 64% surge since rates touched bottom at $4,960 per day on 18 August as part of the summer doldrums, but it is still 67.6% lower than the same period of last year.
LR1s, meanwhile, saw their TCE rate fall to $11,500 per day on the benchmark Middle East-to-Japan route, which is the lowest level since late July.
The rate is 52.1% lower than what LR1s earned this time last year on the route
0
Tags: Aframax
Visit Home
Send to friends
Print
Newsletter
Share this news