An Indian cargo ship loaded with vehicles and food supplies destined for Yemen sank on Saturday off the coast of Oman but without loss of life, Oman’s ONA state news agency reported. 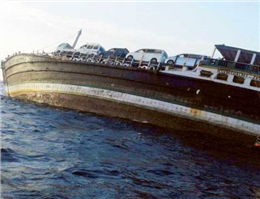 According to MANA, The ship, heading to Yemen's Al Mukalla port after it was loaded in Sharjah in the UAE, sunk off the coast of Jalan Bani Bu Ali province.
Omani fishermen and police rescued all 11 crew on board.
The vessel was carrying 69 vehicles, foodstuff, tyres and engine oils. The vessel sank due to damages caused by overloading, Gulf News reported.
Times of Oman reported the captain as saying: “At around 2am, our cargo vessel was hit by something while sailing. As it was dark, we couldn’t check what it was. Waited until early morning. At around 5am, two of our crew took a dive into water to check what has happened. But by then, the situation went out of control. The water was entering the vessel.”
0
Tags: cargo ship india oman
Visit Home
Send to friends
Print
Newsletter
Share this news