Dragged by lackluster freight rates in the container shipping market during the first half of 2016, the shipping and logistics company China COSCO Holdings Company Limited recorded a net loss of CNY 4.8 billion (USD 720 million) for the period. 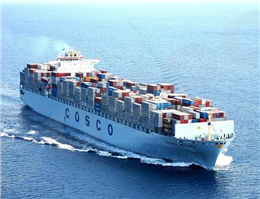 According to MANA, Despite the slower growth of shipping capacity when compared with last year, no significant improvement was made in the imbalance between supply and demand of the shipping sector, China COSCO said, adding that “the freight rates stayed weak and repeatedly fell to record lows.”
The freight rates of main routes between Europe and America dropped by some 40% year-on-year, and those for the routes between Asia and Europe plunged to USD 50/TEU.
As of the end of June this year, COSCO’s fleet had 304 vessels with total capacity of 1.61 million TEUs, representing an increase of 83.3% year-on-year, while it handled 7.4 billion TEUs during the period, an increase of 39.2% year-on-year.
As at the end of the first half the company’s terminal segment operated 171 berths across the coastal regions in China and several major ports in the world. Of which, 149 berths were for container shipping, 20 berths for dry-bulk cargoes and two berths for automobiles.