Four of Iran's Islamic Revolutionary Guard Corps (IRGC) vessels closed to a U.S. warship on Tuesday near the Strait of Hormuz, a U.S. defense official said. 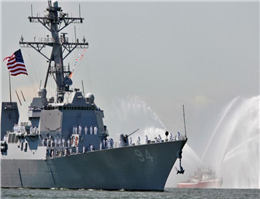 The official, speaking on the condition of anonymity, said on Wednesday that two of the Iranian vessels came within 300 yards of the USS Nitze in an incident that was "unsafe and unprofessional."
IRGC, the Islamic Republic's praetorian guard, is suspicious of U.S. military activity near Iran's borders and appears to be sticking to a familiar posture in the Gulf.
"The Iranian high rate of closure... created a dangerous, harassing situation that could have led to further escalation, including additional defensive measures by Nitze," the official claimed:
0
Tags: Iran Vessels US
Visit Home
Send to friends
Print
Newsletter
Share this news