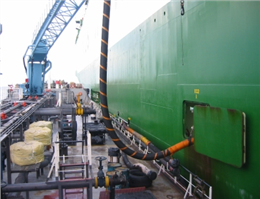 According to MANA, By recognizing the existing capacities and improving the infrastructure, Iran has the ability to enhance the capability for providing bunkering services to ships across the world, he added.
Speaking in a local ceremony, Safaei noted that the Iranian tankers receive 700,000 tons of fuel annually during their travels around the world.
Noting that the fuel produced in Iran has a high quality based on the international standards, he said that the National Iranian Tanker Company has plan to provide easy and fast access to fuel for Iranian ships in the international waters.
There are 60 oil tankers in the work that run on Liquefied Natural Gas (LNG) and orders for construction of 80 new ones have been issued.
The removal of anti-Iran sanctions led to a soar in Iran’s fuel bunkering in the Persian Gulf; a challenge for arch-rival suppliers UAE.
One of the key objectives of the Islamic Republic of Iran in post-sanctions era was announced to be the development of oil industry and trade which seems to have been in gear after the deal made in Vienna on July 14. The statistics are showing a promising future for the Iranian industry in the new era; something which may challenge the regional rivals like the UAE.
Iran’s bunkering service in the Persian Gulf, Strait of Hormuz and the Gulf of Oman was officially commenced in 2005, with selling 392,000 tons of fuel oil to the passing vessels in the first year.
Four years later the new business flourished so much that the annual amount of the trade quintupled into 2,145,000 tons.
A year later the rate hit the record as Iranian ports had sold 3,345,000 tons of fuel to passing vessels and tankers in the Persian Gulf and the Strait of Hormuz. But the business was gravely affected by unfair anti-Iran sanctions three years later and the volume of fuel sold to vessels ebbed to 1,804,000 tons.
0
Tags: Fuel Bunkering iran
Visit Home
Send to friends
Print
Newsletter
Share this news