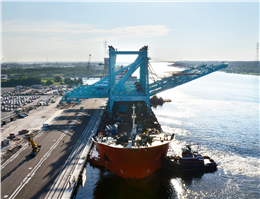 According to MANA, The new electric cranes have the ability to reach across 22 containers, an increase from the 16 container capabilities of the terminal’s current cranes.
“The addition of these cranes is a critical step toward supporting the ever-larger ships calling on the port through the Suez Canal as well as the newly expanded Panama Canal,” Brian Taylor, JAXPORT CEO, said.
Each electric crane will work on regenerative power, consuming power during the lifting of containers and creating energy as they lower, JAXPORT said.
0
Tags: Giant Electric Container Cranes
Visit Home
Send to friends
Print
Newsletter
Share this news