The first Suezmax crude oil tanker that was slated to go through the newly expanded Panama Canal began its transit on Thursday, a public relations official told Reuters. 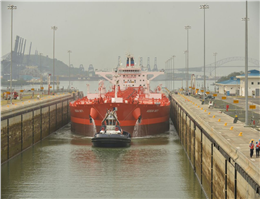 The Aegean Unity, a Greece-flagged Suezmax vessel coming from the U.S. West Coast, entered the Canal Thursday morning, according to Reuters' vessel tracking data.
Suezmax-sized vessels, which can carry some 1 million barrels of oil, were unable to pass through the canal prior its expansion. The new canal may help open new trade routes for oil.
The expanded Panama Canal, which opened in late June, got off to a rocky start when one Chinese container ship hit a wall during transit, gashing the side of the ship and necessitating repairs. Other ships had bumped into the canal's fenders, even ripping one off, when passing through the new locks.
The destination of the Aegean Unity was not immediately clear. It was previously in San Francisco, according to Reuters vessel tracking data.
0
Tags: Suezmax oil tanker
Visit Home
Send to friends
Print
Newsletter
Share this news