In a historically weak contracting environment the cruise sector has seen a strong level of newbuild ordering and investment in the year to date, says a research report by Clarkson. 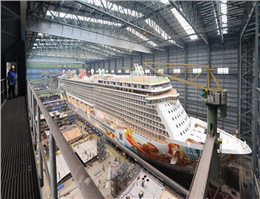 According to MANA,Cruise lines have continued to expand their fleets, with new markets such as China in their sights. While a number of yards have benefitted from this firm level of newbuilding activity, they have all been European and the region remains dominant in the cruise sector.
In the first seven months of 2016, 17 cruise ships of a total 45,420 passenger berths have been reported contracted, already surpassing the 11 ships (33,788 berths) ordered in full year 2015.
Cruise ship ordering can be cyclical in nature as shipbuilding capacity is limited and owners tend to contract cruise ships in series, restricting slot availability. Following low levels of ordering in 2008 and 2009, cruise investment has increased and an estimated $10.4bn of orders have been reported in 2016 so far.
With newbuilding activity in the major volume sectors limited in the year to date, the cruise sector accounts for 49% of global estimated contract investment.
Generally, owners have been ordering larger cruise ships in recent years and over half of the vessels ordered in 2016 so far have a capacity of between 3,000 and 5,000 berths.
Compared to ships contracted between 1996 and 2000, the average berth capacity of cruise newbuilds ordered since the start of 2014 has nearly doubled to c.3,000 berths. However, there has also been increased interest in smaller cruise ships of 1,000 berths or fewer and seven of these vessels have been reported ordered in 2016 so far.
A relatively small number of shipbuilders are active in the cruise sector and the market is dominated by European yards. Of the 15 shipbuilders currently with a cruise vessel on order, only Japan’s Mitsubishi HI and US yard Nichols Bros are not European.
0
Tags: European Yards cruise
Visit Home
Send to friends
Print
Newsletter
Share this news