The Indian Ministry of Shipping is in the process of installing solar and wind based power systems at major ports across the country to help the reduction of carbon emission at the ports and reduce cost of power purchase by 2017. 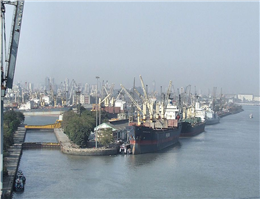 According to MANA, It aims to set up 90.64 MW of solar energy capacity at the nation’s 12 major ports and 70 MW of wind energy capacity at four major ports. So far, 6.94MW of solar projects have already been commissioned, with Vishakhapatnam Port. The other ports where solar projects have been commissioned are Kolkata Port, New Manglore Port, V.O. Chidambaranar Port and Mumbai Port.
The ports installing wind power include Kandla, V.O. Chidambaranar Port and Kamarajar Port.
The projects are a part of the Green Port Initiative launched by the Ministry of Shipping designed.
The funds for the projects are coming from the ports, not from the Ministry. The average growth of the 12 major ports during the period between April- July stood at 5.28 percent.
0
Tags: india energy SOLAR WIND
Visit Home
Send to friends
Print
Newsletter
Share this news