All IRISL Sanctions Lifted in the Light of JCPOA 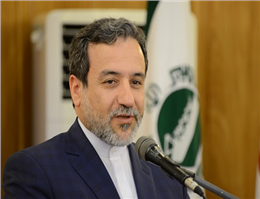 In the Iran-Japan Friendship Association last night, MANA reported, Seyyed Abbas Araghchi gave a speech on the two nation’s cultural and economic ties.
Making a reference to the historical ties, Araghchi called Iran and Japan as two old pals and asserted that the ties between the two nations was based on culture and friendship far earlier that the time they commenced economic relationships. As the history testifies, the cultural give and takes between the two nations go as far back as the era of Sassanid Dynasty.
Araghchi, Iran’s once ambassador to Japan, counted the cultural and social similarities of the two nations and emphasized that Japan, as a significant partner to Iran, maintained its ties with Iran at the sanctions era, and this vividly highlights a long history of unity between Iran and Japan.
As a senior member of Iran’s Nuclear Negotiation Team, Araghchi pointed out to the chances for extending international ties after Justified Comprehensive Plan of Action (JCPOA), and proposed that Iran and Japan’s economic ties have a 5-decade history given the energy trade and technology transfer.
After reaching a major agreement on Iran’s nuclear program with the West, Araghchi added, Iran and Japan managed to revive their ties at full throttle since the two nations had preserved their connections at the sanctions era.
Announcing that Japan has allocated a 10-billion dollar connection line for its economic exchanges with Iran, Araghchi submitted that the credits would be activated once Japanese companies fulfill the investment conditions and the economic ties of the two countries would flourish and thrive.
Asserting that vessels could sail on the international waters with Iran’s holy flag, he added: all insurance problems have been resolved.
Expressing his hope to promote cultural, social and economic ties with Japan, Araghchi stated: the new post-sanctions era could be regarded as a golden opportunity for reviving ties between the two nations.
0
Tags: IRISL Sanctions Araghchi called
Visit Home
Send to friends
Print
Newsletter
Share this news