As the weak volume growth recorded in the first half of 2016 dragged full year volume projections down, Alphaliner said that the global container throughput is expected to grow by only 0.3% this year. 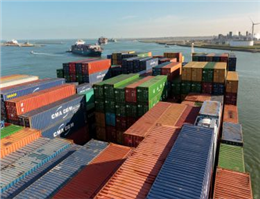 According to MANA, total throughput at the world’s top 30 container ports is estimated to have grown by only 0.2% in the first six months of the year, with weak growth recorded across all main regions.
The top 30 ports currently account for over half of the global container throughput, with aggregated volumes reaching 184.57 million TEUs during the first half of the year, compared to 184.28 million TEUs recorded in the same period of 2015, according to Alphaliner.
Out of the top 30 ports, twelve have reported volume reductions, including six ports that are ranked in the top ten.
The port of Hong Kong’s volumes dropped by 10.5%, followed by the port of Dubai which was a decrease of 6.1% in its throughput, Singapore handled 5.1% less volumes, while Tanjung Pelepas and Rotterdam saw a decline of 2.8% and 2.3%, respectively.
The world’s busiest container port, Shanghai, also reported a 0.8% reduction in total throughput at 17.89 million TEUs for the first half of 2016, compared to 18.03 million TEUs last year.
0
Tags: throughput Container Volume Container Alphaliner
Visit Home
Send to friends
Print
Newsletter
Share this news