Offshore vessels owner and operator Tidewater Inc has been hit by a first quarter loss of $89.1m, an almost six-fold increase compared to the deficit in the year-ago period. 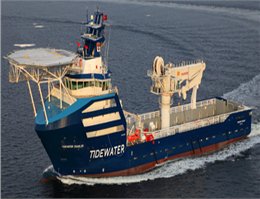 Tidewater plunged deep into the red with a loss of $89.1m in the first quarter ended 30 June 2016, widening from the loss of $15.05m in the same period of 2015, MANA correspondent reported.
Revenue for the quarter was sliced to $167.93m from $304.77m in the previous corresponding period.
“The decrease in oil and gas prices that began in the second half of fiscal 2015 and continued throughout fiscal 2016 has led to materially lower levels of spending for offshore exploration and development by the company's customers globally,” Tidewater commented.
As at 30 June 2016, Tidewater has 181 active owned or chartered OSVs and 87 stacked, compared to 245 active owned or chartered vessels and 28 stacked in the year-ago period.
0
Tags: offshore tidewater operator ship owner
Visit Home
Send to friends
Print
Newsletter
Share this news