German shipping major Hapag-Lloyd said its first-half year “result is disappointing,” due to subdued economic growth in many parts of the world, persistently tough competition in the liner shipping industry and further declines in freight rates, which marked the first half of 2016. 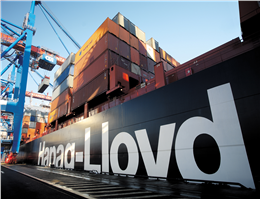 Hapag-Lloyd’s net loss for the period was at EUR 142.1 million (USD 158.3 million), compared to prior year’s net profit of EUR 157.2 million (USD 175.2 million), MANA correspondent reported.
Revenue declined to EUR 3.8 billion in the first half of the year from last year’s first half revenue of EUR 4.7 billion, while the company managed to cut year on year transport expenses by some EUR 600 million, or almost 16 percent.
“The first-half result is disappointing,” Rolf Habben Jansen, CEO of Hapag-Lloyd said, adding that the company’s cost saving measures and efficiency programs are on track and that the synergies from the merger with CSAV are being realized on schedule. However, he said that “this isn’t enough to completely compensate for the significant drop in the average freight rate.”
Even though freight rates have recovered towards the peak season in various trades, this rebound “is coming later than anticipated and more is needed going forward,” Habben Jansen added.
In the second half of the year, Hapag-Lloyd said that its main focus would be to further improve its cost base and to do “whatever we can to get freight rates back to a more sustainable level.”
According to Habben Jansen, given the current competitive environment, it is very important to complete the transaction with United Arab Shipping Company (UASC) as quickly as possible and to start the integration of the company immediately after the completion of all pre-closing conditions.
“The integration will bring us annual net synergies of at least USD 400 million, some of which should already take effect next year,” he added.
0
Tags: Hapag-Lloyd German performance 2016
Visit Home
Send to friends
Print
Newsletter
Share this news