Global Port Operators to be Ranked by Drewry

LARGER liner alliances, bigger ships and softening demand is changing the landscape of the container port industry; although still highly profitable, it is becoming more of a value sector than one of growth, according to a new report 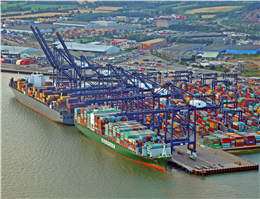 According to MANA, Drewry’s Global Container Terminal Operators Annual Report 2016 says global and international terminal operators have had no choice but to face up to the dual challenges of weaker demand growth and rising operating and capital costs due to the influx of larger vessels and the formation of new alliances.
Drewry expects global container port demand to grow by less than 3% each year through to the end of the decade due to a steep slowdown in Chinese exports in particular. The only real positives, it says, will be resilience from the Middle East and south Asia, but a boost could also come from a potential recovery from Russia and a rise in the oil price.
In response to the continuation of slow volume growth, Drewry says terminal operators and investors have been urgently reviewing their respective capacity expansion plans.
APM Terminals and PSA International are expected to hold on to their respective positions of second and third, while the current largest international operator is forecast to fall to fourth in the rankings.
0
Tags: box port industry
Visit Home
Send to friends
Print
Newsletter
Share this news