Future of Container and Order-book Markets

The opening of the new, expanded Panama Canal locks in June has ushered in a new era for container ship sector, and is prompting significant changes in asset and deployment trends. 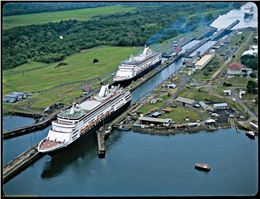 The ability for a containership to transit the Panama Canal has long been a defining vessel characteristic, with the emergence of a distinct Panamax sector above 3,000 TEU, comprising vessels with a maximum beam of 32.3m, MANA correspondent reported.
However, says Clarkson Research Services, rapid upsizing has meant that the fleet capacity of ships in sizes Panamax and below has been dwarfed by the growing numbers of Post-Panamax ships in recent years. By the start of July 2016, 63 percent of boxship capacity was unable to transit the old locks of the Panama Canal, says Clarkson.
The recent completion of the canal expansion means that only 15 percent of fleet capacity is unable to pass through according to current official dimension restrictions. Clarkson reports that at the start of July, the sub-3,000 TEU sector comprised 4.0 million TEU, accounting for 20 percent of total fleet capacity (with 11 percent of capacity on order accounted for by this size range).
In the 3-7,999 TEU range, all ships are now able to transit the canal, up from less than 50 percent previously, and a significant 36 percent of fleet capacity (but only four percent of the orderbook) falls into these sectors.
The 8-11,999 TEU sector, totalling 5.0 million TEUs (25 percent of the fleet) comprises Neo-Panamaxes likely to form part of the initial wave of upsizing on routes through the canal.
Many ships sized 12-14,999 TEU are also seen as Neo-Panamaxes. While only 59 ships of the 192 ships in this sector are able to transit based on official limits, another 39 fall so close to these limits that they are likely to be able to transit.
Finally, ships sized 15,000+ TEU have notably distinct designs from vessels in the 12-14,999 TEU sector, and are clearly too large to transit the current locks. There were only 62 ships of this size in the fleet at the start of July (six percent of fleet capacity).
Clarkson concludes that the expansion of the Panama Canal locks and the continued rapid upsizing of the fleet in recent years have both brought about the need for high-level segmentation of the container ship fleet to evolve as well. It’s clear that size matters and that the containership industry has reached a significant milestone, say the analysts.
Orderbook Drops
The container ship orderbook, measured as a percentage of the existing fleet, has fallen to 17.1 percent, its lowest level since 1999. The ratio is imbalanced, depending on vessel category, according to analyst Alphaliner. It reaches 56 percent for ships over 10,000 TEU, against only 4.5 percent for ships below that size.
Idle tonnage is increasing with 269 jobless ships with an aggregate capacity of 906,000 TEUs as of July 25. The increase is driven by the desire of container lines to control overcapacity and by the opening of the larger locks of the Panama Canal, which has severely depressed demand for Panamax ships.
S&P Down
VesselsValue reports that July 2016 saw a 48 percent reduction in the total value of secondhand sales concluded, compared to July last year. The largest drop was in the
container ship sector where only two sales were concluded compared to 31 in July 2015.
A combination of low charter rates, over-supply of tonnage and the widening of the Panama Canal has seen an increase in the number of container vessels sent for demolition.
0
Tags: expanded panama canal Container transit locks newbuilding Demolition
Visit Home
Send to friends
Print
Newsletter
Share this news